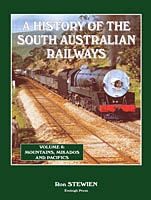 A History of the SA Railways Vol 6

William Alfred Webb landed in South Australia in 1922. His assignment: to rehabilitate the ailing State-owned railway system. In next to no time he found one very obvious weakness; an inadequate, run down and completely inefficient locomotive fleet. Taking the bull by the horns, he right away appointed Fred Shea from Victoria as his new Chief Mechanical Engineer, setting Fred on the road to becoming one of Australias great engineers.

The outcome: forty-five steam locomotives and three steam wrecking cranes that set standards of excellence that lasted until the South Australian Railways as a corporate body was finally dissolved on 8 December 1975.Not only did Shea excel as a steam locomotive engineer but during the Second World War (and after) he stood out as a giant in the construction of warplanes, munitions and in due course, diesel-electric locomotives.

Webbs original intention was to have a number of each of his Big Engines built by contract and to have these engines numbered thus: the ten 4-8-2 Mountains, Nos 500 to 509; the five 2-8-2 Mikados, Nos 550 to 554 and the ten 4-6-2 Pacifics, Nos 600 to 609. Hence Mountains, Mikados and Pacifics. When it was realised that the Mikados might as a class exceed 50 engines they were moved to the 700 block where they could build up to 100 locomotives if necessary.The book opens with the Elusive Search for that Engine describing the first two decades of the 20th Century when the SAR was paralysed by poor administration. Then came Bill Webb from the US who immediately called tenders for the first 30 of his new brand of power. A contract was let and Fred Shea went to the Armstrong, Whitworth works in Newcastle-upon-Tyne to set the wheels in motion. After delivery of these engines, a period of running in threw up many problems culminating in an impending court battle with Armstrong, Whitworth but which was thankfully settled out of court.

There followed further engines erected in the re-born Islington Workshops and the purchase of three new Wrecking Cranes from Cowans, Sheldon.

Ron Stewiens second book in the series on the history of the South Australian Railways promises to be a welcome companion to Ron and Malcolm Thompsons Volume 1 The Early Years.Ron has skipped to Volume 6 at the request of readers anxious to read about the mighty 500, 600, 700, 710 and 720 Class locomotives inspired by Commissioner Webb and delivered by Shea, his outstanding Chief Mechanical Engineer.

This book matches Volume 1 in general style but with more pages (340), more colour and more photographs (207 black and white, six sepia and 17 in full colour, including front cover), one painting in full colour, three maps, 40 diagrams and plans.There are six appendices which include the specification for one of the tender calls; the locomotives tendered; details of the dispute with Armstrong Whitworth and a rolling stock list. Finally, at the end there are three double page spreads and three gatefolds of the 500, 600 and 700 class engine and tender general arrangement drawings.